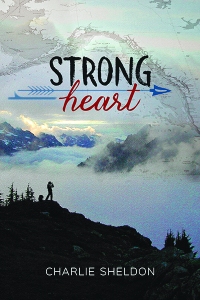 How does a heart grow strong? Read this wonderful book and find out. The characters charmed and surprised me, and I found myself a willing companion on their journey, caring deeply for them. — Kim Heacox, author of JIMMY BLUEFEATHER and RYHTHM OF THE WILD

One stormy May night, just as Tom Olsen is about to leave with his Native American friends to visit his grandfather’s grave deep in Washington State’s Olympic Peninsula wilderness, he answers a knock at his door to find an abandoned thirteen year old girl.

The girl announces her name is Sarah Cooley and that Tom is her grandfather. She tells Tom he lives at the end of the earth. All she sees is dripping forest, tall trees, rain and wind. Astonished, all Tom sees is trouble. He knows he should cancel the trip and deal with Sarah, but when his friends suggest bringing Sarah along,Tom reluctantly agrees, hoping a backpacking trip might teach Sarah some sorely needed lessons about character, responsibility and grit.

All too soon, Tom and his friends have reason to  wonder – are they taking Sarah Cooley on this journey, or is she taking them?

Adventure, scientific inquiry, a tinge of mystery, and a hint of the unexplainable infuse this meticulously-imagined tale. In a story matching the breathtaking scope of its Pacific Northwest and North Pacific setting, Sheldon’s tale startles, yet challenges us to think.

BUY IT at Amazon (Paperback, Kindle, Audio) or your local independent bookstore.

BOOKSTORES and LIBRARIES, order through INGRAM

“I’m in love with your book, savoring my life in it, days and nights, taking it to my dreams…”

“A grand story, a coming of age story with a twist…if you love adventure, mystery…then this is a novel I would recommend.”

“A great story – fun reading! I found myself wanting to be there and be part of it. The tale piqued my curiosity about the Northwest, about the cultural origins of the peoples in the Northwest, and about how they’ve held onto their identity.”

“Outstanding! A must read! What a wonderful story! The kind of book you want to curl up with on a couch and keep reading until it is done…”

Charlie Sheldon studied at Yale University and the University of Massachusetts, where he received a Master’s Degree in Wildlife Biology and Resource Management. He then went to sea  as a  commercial fisherman off New England, fishing for cod, haddock, hake, lobster, red crab, squid, and swordfish. He spent 28 years working for seaports (New York, Seattle, and Bellingham, WA) as a project and construction manager and later as an executive, including habitat cleanup projects and working with Puget Sound Tribes to reduce tribal fishing conflicts. Later he returned to sea, shipping out with the Sailor’s Union of the Pacific as an Ordinary
Seaman, Able Bodied Seaman, and Bosun. His last gig was as bosun aboard USNS Shughart, New Orleans to New York, in 2016. Always a writer, he published Fat Chance with Felony and Mayhem Press in 2005. He began working on ideas for Strong Heart, his tale about the Olympic Mountains, the Pacific coast, and human origins long, long ago and began serious research in 2010. These days he hikes in the Olympics whenever he can, cooks for his wife, and continues to write tales in Ballard, Washington.